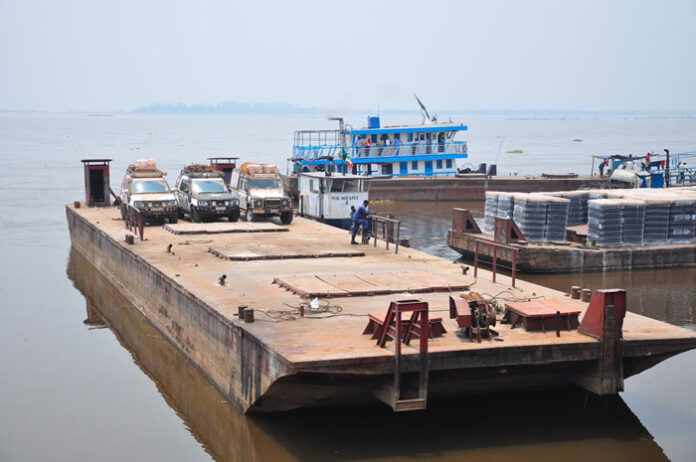 Trying to cross into the next country DRC Congo we had heard that ferry crossings from Brazzaville to across the Congo river to DRC Congo could be notorious for being ripped of by someone during the crossing…they were right!

While in Brazzaville we spoke to few overlanders who had entered via Gabon and had enquired at the port the previous day to get an idea of costs and it was clear that nothing was clear!

The day we decided to leave another overlander Darren in his green Landrover and a German cyclist Joni decided to make the same journey as well.

At the port entry

Which is very close to the centre of Brazzaville plenty of guys in uniform (and some without) were busy controlling the entry to the port and in their hands they had a book of tickets to hand out to those entering.

When we were stopped we were asked immediately that as a tourist we would have to pay 10,000 CFA to enter, as the tickets that were printed were for 1500 CFA I argued the toss out of trying to enter the port for that amount rather than the 7 tickets that they said was what ‘all’ tourists had to pay, local taxi’s by the way were paying these guys 500 CFA (£0.60p) to come and go as they pleased which also infuriated me and I was not budging from paying the tourist price, Darren also at the gate paid up his 10,000 CFA as he didn’t want to mess around but that also left us in a difficult situation that another ‘tourist’ had paid the full amount.

Joni the German cyclist was asked to pay but he got through the entry gate without paying anything.  After speaking to the ‘chief’ and even offering to buy him a beer which he wanted but also wanted us to pay the full amount we decided to see if there was an alternative entrance to the port as another overlander Andrew had told us the previous day.

To the right of the port as you come out of the main entrance there was a side road that went over some train tracks before the Total garage that led to a very small entrance and there the port controllers only wanted 1500 CFA for us to enter, we were happy to have saved ourselves 8500 CFA (£10) by going this different route.

Reka went with a few officials to do all the exit formalities with various people while I went in search of the ferry ticket price.  In a small office, one guy who was responsible for issuing various tickets wrote on a piece of paper for me that the 4×4 ‘camion’ would be 25,000 CFA (£30) plus 6500 CFA (£8) for an additional passenger (Reka) for the ticket.

No matter how much I tried to negotiate with this guy his hands were tied as his boss was sitting right behind him on a cheap Chinese plastic chair.  Even after buying the guy a coffee and his colleague a coke he was not going to reduce the price (and I bargained hard with him!), eventually he knocked off 1500 CFA and the total cost for the ferry was 30,000 CFA (£35).

After a quick beer we were first in line to get into the area where the ferry was to depart but it was a long wait for the hundreds of people leaving the ferry into Brazzaville with their mattresses on their heads, sacks of grain and various other bags that looked inhumanely possible to carry on their heads but they did!

A guy in civilian clothes came up to us and asked to see our port entry ticket and quickly started shouting at us and others around him that we had not paid the correct amount and began to round up a few other dodgy looking fella’s to back up his story that for tourists we must pay 10,000 CFA.  It seemed a huge con that everyone was in on including the army looking guys that must divvy up the profits between them at the end of a profitable day.

After chatting to one of these guys we ended up giving him an extra 3000 CFA (£4) and he gave us a bunch of extra tickets that would satisfy any other ‘official’ that wanted to see these tickets!  It was hot while waiting in the sun to enter the ferry but when they opened the gates there were hundreds of people all hustling and bustling around the ferry, many ‘officials’ wanted to see our carnet du passage and thoroughly examine it like a piece of important evidence at a crime scene and then give it back to us with a nod of approval.

Reka had seen a poor woman who was on a wheelchair being knocked off her chair by some officials that wanted money from her to enter the ferry, many people started shouting at the official and a crowd gathered to help her, it was not a place to hang around in and after negotiating the ramp we were on the ferry.

There are money changers that convert CFA to dollars and Congolese francs so you have some currency for when you arrive at the Kinshasa port.

The ferry took just under an hour to get to Kinshasa,  it was a fascinating boat ride for people watching, there were many drunkards on the ferry, many salesman selling drinks and baguettes with sausages, many blind people who were being aided by individual helpers and the icing on the cake was when the ferry approached to dock (loosely termed) that all the passengers started to climb over each other to be at the front of the ferry to be one of the first to leave, this included the blind people and disabled people who were being carried in their wheelchairs, its the done thing but I was happy to be in the vehicle and await this madness to die down a bit!

After driving up the ramp and successfully avoiding crushing peoples feet in the process we were in DRC Congo.  Darren and Reka went to do all their paperwork while I waited around both Landrover’s.  Within a few minutes some ropey looking blokes in tattered white overcoats (school chemistry lessons came to mind) and wellington boots carrying clipboards came over to me and ‘told’ me that in order to enter DRC I had to have Maggie disinfected from all the dangerous bugs that I have allegedly brought with me from the Congo.

I told them that they were more than welcome to disinfect the vehicle but I wouldn’t pay them a penny, they wanted $60 and then $40 after the discussion heated up a bit.  I left these wannabe lab technicians to it and joined Reka and Darren in the passport control section.

An hour later of various inane questions we had got our passports and carnet stamped and were ready to leave.  Approaching the main gate to leave a policemen and his lab cronies stopped us from leaving and aggressively told us to park up as we weren’t leaving without our dosage of bug spray.

After our conversations were going nowhere they led us to the office of the chief of disinfectant (nice title) who shuffled around some old photocopies of battered paper which stated we must pay, the entrance to this office by the way was filthy and we were almost killed by hundreds of bag handlers that were busy running through a tunnel taking the heaviest of packages to the ferry bound for Brazzaville.

In the office there were several people all talking at one and it became heated, I was told that either I turn around and get on the ferry back to Brazzaville or pay up, Darren who was also in the office decide to pay up his $60 to avoid any further conflict but that then left Reka and I in a situation where we were in a non negotiable situation.

Angrily we paid up and the lab rats sprayed what seemed like some cheap chemical on the underside of Maggie and left the port,  it was clear to me that this port was taking the piss with foreigners entering DRC Congo.

Border Crossings: South Africa to Swaziland (and back)