Home In Pictures A self-drive safari in Etosha National Park 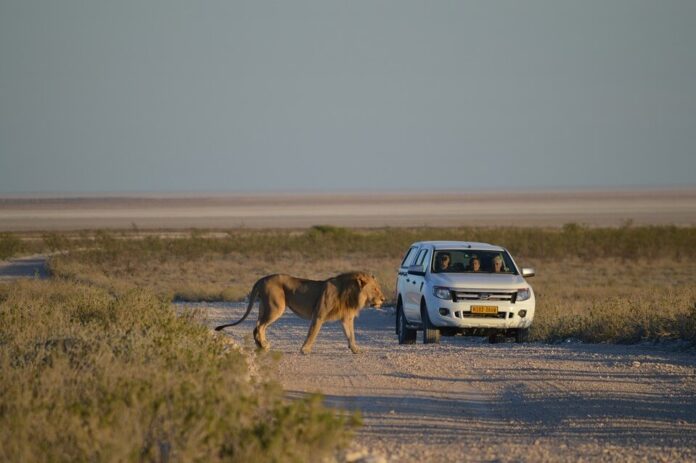 After leaving Spitzkoppe, Maggie and the team continued on the journey north. Our next stop was one of Namibia’s most popular tourist attractions: Etosha National Park.

The itineraries of nearly everyone we met on the road in Namibia included a visit to Etosha. And for good reason! This was Noel’s second trip to the park, which spanning 22,000 square km is one of the best for wildlife viewing in Namibia, if not Southern Africa. Lions, cheetahs, elephants and black rhinos and are just some of big game that can be found within the park.

The park also surrounds an immense salt pan, a depression so large (5,000 square km) that it can be seen from space! The flat, grassy landscape on the edge of the salt pans made it very easy to spot animals and get great photos. The park also has a network of well-maintained (albiet dusty) roads with many lookout points and waterholes.

It didn’t take long for us to encounter some of Etosha’s wildlife. On our very first sunset drive we were chased nearly off the road by this lone bull elephant.

Being chased by a bull elephant

Parking at one of Etosha’s many lookout points and waterholes is a great way to see some amazing wildlife, like this thirsty giraffe.

It’s not always about the big game – the park is also home to many unique and beautiful antelope species, such as gemsbok and hartebeest.

It’s easy to spot herds of zebra and wildebeest in the vast, flat landscape.

On the road to Etosha

Driving from Spitzkoppe to Etosha was stunning and full of beautiful scenery. We opted to take the C35, to pass through the beautiful Branberg Nature Reserve. We camped at the Brandberg White Lady Lodge (named after famous rock art) on the banks of the Ugab River.

From there, we took the C39 to Outjo, a great town for filling up on food and other supplies before hitting the C38 all the way to the park gate.

There are many camping options in and around the national park, including three NWR-run campsites within the park boundaries.

We opted to stay at the Okaukuejo Rest Camp, a few km from the Anderson gate, but we were unfortunately underwhelmed. Overcrowded and full of garbage-stealing jackals, we could only bear to spend one night in the camp, especially at the insane price of N$495 (US$36) per night!

We came without a reservation and were lucky to get a camping spot because it’s often fully booked (or so we’re told!). So if you don’t get a spot, our advice: don’t fret, you might have a better experience camping at one of the many lodges that line the roads to the park gates.