Home Experiences Overlanding Lesotho: a week in the Mountain Kingdom 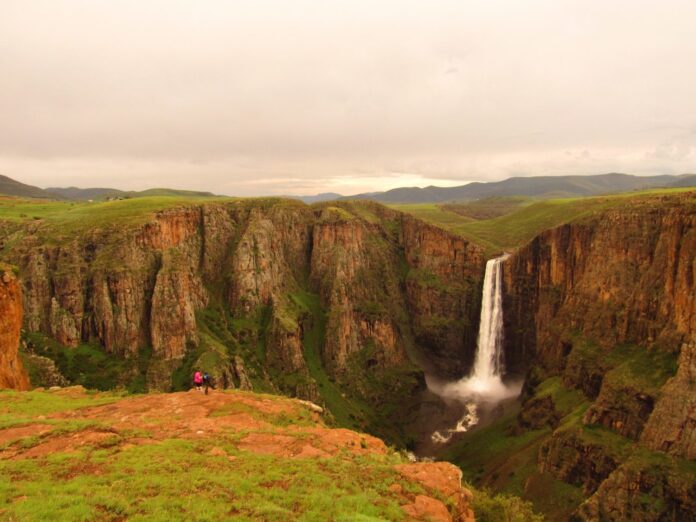 After leaving the Drakensberg mountains, we headed for the Mountain Kingdom of Lesotho. One of Africa’s most mountainous countries, Lesotho does not fail to disappoint the overland traveller.

We found the country to be an absolute joy to overland – with some of the highest mountain passes in Africa, including the aptly named ‘God Help Me’ pass, each day of driving was full of stunning mountain scenery. And many of the passes are not yet tarred, adding 4×4 adventure to the mix.

The scenery isn’t the only thing that’s beautiful about the country – Lesotho has a rich cultural heritage. Highlights of our trip included passing through high-altitude villages, riding ponies with the locals, and visiting the amazing craft workshops.

Unfortunately, we found that there are limited options for overlanders in terms of camping, although there are a few notable places (listed below).

You can read about the overland route we took below, and follow on the map at the end of this post! 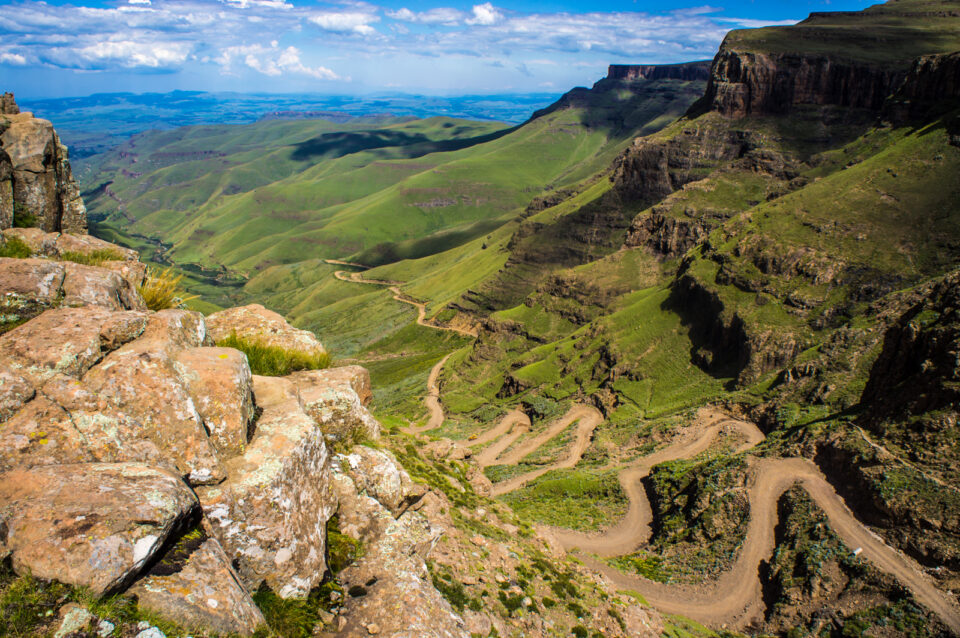 The Sani Pass, between South Africa and Lesotho

What more exhilarating way to enter Lesotho than through South Africa’s highest mountain pass? The Sani Pass climbs from 1,544 to 2,876 metres, ascending more than 1,300 metres to end at Africa’s highest pub, the Sani Mountain Lodge, just over the Lesotho border.

The track is not paved and is strictly 4×4 only. But don’t let that deter you! We were initially worried about the condition of the road, but we found that it was well-maintained and well-used – dozens of 4×4 tour companies plough up and down the pass each day. With the help of her low range gears, Maggie flew up the pass without a problem.

The campsite at the Sani Mountain Lodge is not really a campsite, just an open, windswept area on which it is possible to camp. So we continued 8km down the road to the Sani Stone Lodge, which offers better and more affordable facilities.

Central Highlands and the road to Katse Dam 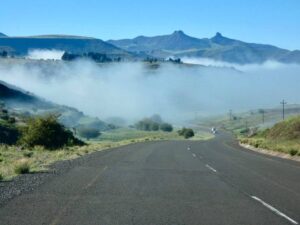 After entering Lesotho from the Sani Pass, there are two routes heading to Maseru (the capital): follow the A1, which is now tarred the whole way, through the Maloti mountains, or take the dirt and gravel roads through the central highlands to Thaba-Tseka and the Katse Dam. Wanting to put Maggie to the test, we opted for the later and were not disappointed!

The highlights of traversing the 100km+ of mountainous, dirt roads include stunning scenery and passing through what feels like an endless number of high altitude villages. This is where you can catch a glimpse of true rural Lesotho life: ponies are the best means of transport, the mountains are dotted with rondavels (traditional, round Basotho houses), and wool blankets and balaclavas are the latest fashion.

Tips for overland travellers: make sure your brakes are fully tested before taking this route! 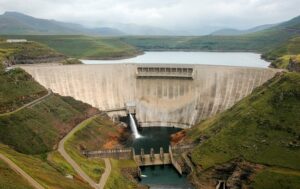 After 100km of steep dirt roads, snaking perilously around mountains at 2,800 metres, we have never been so happy to see paved road when we reached the stunning Katse Dam!

The Dam is Lesotho’s second largest, part of the Lesotho Highlands Water Project, which supplies water to nearby South Africa and also hydroelectricity for the country. Yet, even in rainy Lesotho, we saw the impact of drought on the water levels in the Dam and in the Malibamat’so River – scary considering that so many rely on these Dams for water supply.

Even for those not interested in civil engineering, the views of the Dam from the free campsite (next to the visitor’s centre) cannot be beat! With toilets and showers to boot.

The next day we set off from the Katse Dam through the Mafika Lisiu Pass. This prize-winning road climbs to a breathtaking 3,090 metres over 30km, offering stunning views of the Maloti mountains. 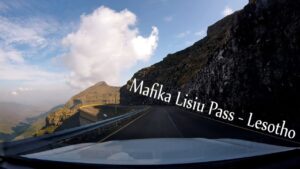 The hairpin bends and steep ascents lead to the stunning Bokong Nature Reserve, which was unfortunately closed when we visited. The pass was also too misty for good photos, but my favourite view was from Pitseng (above) the next day, the first village after descending the pass and where we spent the night camping at the lovely Aloe’s Guest House.

The ‘lowlands’: craft and culture 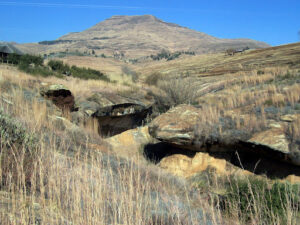 San Rock Art at the Liphofung Cave and Cultural Village 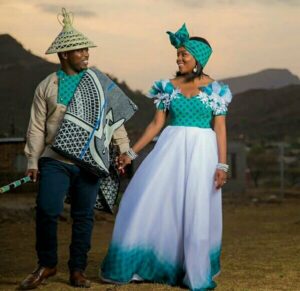 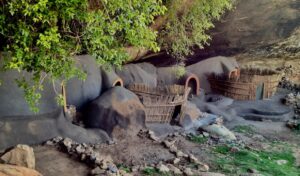 After descending into the Lesotho ‘lowlands’, which sit at over 1,000 metres, we visited a number of interesting cultural sites. The first was the Liphofung Caves and Cultural Site, near the village of Meula, with a large sandstone shelter housing a number of San rock paintings and stone-age artifacts (picture above).

We also visited Teyateyaneng, outside of Maseru, which is somewhat of a craft and workshop centre. Our favourite was the Sotho Design workshop, a cooperative where over 60 women design and weave beautiful tapestries (pictured above).

But by far our favourite site was the Ha Kome Cave Dwellings, between Teyateyaneng and Thaba Bosiu (Coordinates: S 29° 14′ 40.162”E 27° 52′ 0.553′‘). The site, which is somewhat hard to find and only accessible by a steep and degraded dirt road, features a number of unique homes built into the sandstone overhang in 1824. The descendants of the original inhabitants – four very sweet Basotho grandmothers – still live in the houses and warmly welcome visitors into their homes.

Semonkong Lodge and the Maletsunyane falls 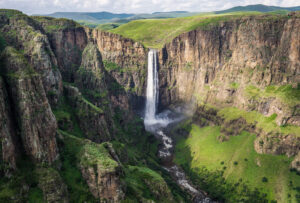 Our last stop in Lesotho, before heading back to South Africa, was the Semonkong Lodge and Maletsunyane waterfall. We were very impressed with the Semonkong Lodge, which offers by far the best camping experience in Lesotho, deep in the Central Highlands. In addition, the lodge offers a number of activities, some of which benefit the local community, including pony trekking and abseiling.

We gave abseiling a miss, but did spend an enjoyable morning trekking to the waterfall, which at 204 metres is higher than Victoria Falls, on horseback