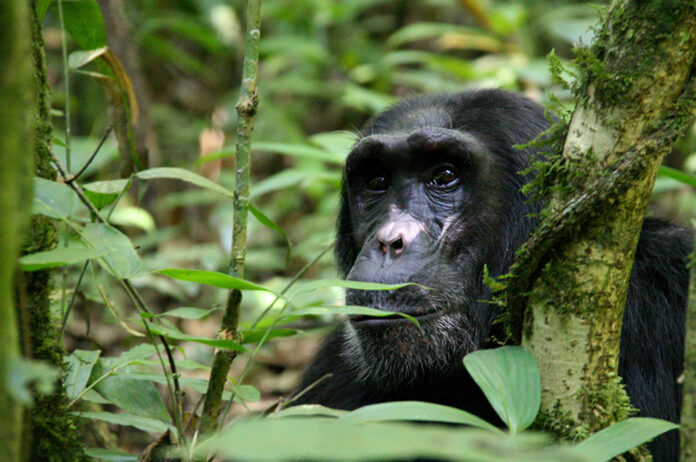 When thinking of primate safaris in Uganda, the first thing that comes to your mind is probably the magnificent mountain gorilla and their small cousins the chimpanzee, both of these are in the category of the great apes. This primate day tour takes you to Kibale Forest National Park; Africa’s greatest tropical rain forests for chimpanzee tracking combined with gorilla trekking in Bwindi Impenetrable National Park and Lake Bunyonyi. The main reason why people come to Uganda is to see these amazing threatened creatures who share 98% of our DNA. There are various opportunities to see the chimpanzees of Uganda and combine them with the Mountain Gorillas of Uganda. Uganda offers more primate and wildlife diversity than any other African country.

Uganda is home many different primate species with Kibale National Park containing the highest density in all of Africa. As well as the chimpanzee and gorilla, black and white colobus, red-tailed monkeys, grey-cheeked mangabey, L’Hoest’s and blue monkeys and olive baboons can be seen during game drives, launch trips or nature walks along with smaller nocturnal species such as the bush baby and Potto. Mgahinga National Park also contains one of the last remaining habitats of the endangered golden monkey.

Our closest animal relatives are the great apes: chimpanzees, orangutans and gorillas. About 98% of the DNA in your genes is exactly the same as in chimpanzees, making you as closely related to a chimp as horses are to zebras. The reason we have them behind bars in zoos and research settings is because chimpanzees can be very dangerous it’s to protect ourselves. So, really wild chimps don’t attack people. But in captivity, they have learned in the meantime that they are stronger than humans.

Not only can you track chimpanzees in the Kibale rain forest Jungle, but you can do so at Semliki which is also a rain forest Jungle down the fabulous Albertine Rift Escarpment, Budongo Mahogany Forest at Murchison Falls, and Kyambura Gorge plus Kalinzu Forest reserve at Queen Elizabeth Park.

Spending an hour with both the chimpanzees of Uganda and the mountain gorillas alone, are worth the trip to this country.  You can also spend the day with chimpanzees by going on a Chimpanzee Habituation Experience.

On the day of your safari, you are picked up on time by the safari guide representative with meet and greet. After you head to Kibale Forest National Park and Kyaninga lodge for you first night stay.

Assemble at Kanyanchu headquarters at 8:00am to go for the most popular activity in this park which is chimpanzee tracking. The warden briefs about the chimp rules and the forest. After the briefing you enter in the forest to search for the primates. We locate the chimp by listening for their plant hooting calls, then hustle to the area from which they are calling. We get only one hour to observe them as they feed in fruiting trees, swinging on trees, playing, and socializing with each other. More primates like black and white colobus monkeys, grey cheeked mangabey, red tailed monkeys, bush babies, Pottos and many bird species like the yellow spotted Nicator, rumped tinker bird, littler Green bul, green breasted pitta, the crowned eagle, black bee-eater and mammals like elephants can be seen in this walk.

In the afternoon we visit Bigodi swamp which is maintained by the local community. The swamp is known for its rich diversity of birds and primates; these include the great blue turaco, blue monkeys, baboons, otters, mongoose, and bush bucks among others.

Explore Bwindi Impenetrable National Park by driving southwest of Uganda to search for mountain gorillas which is a lifetime experience to participate in. mountain gorilla’s habitat is limited to protected national parks in two regions of Africa. One group of gorillas lives in the Bwindi Impenetrable National Park in Uganda. The other group is spread over three national parks in the Virunga mountain region of the Democratic Republic of Congo, Uganda, and Rwanda.

Trekking gorillas through the forest might be quite a challenge as humidity and heat are at odds with all the heavy clothing you should wear, the paths are sometimes either steep, slippery or both and you should always mind your step with little chances of looking around at the impenetrable forest from the inside.

They leave their sleeping sites when the sun rises at around 6 am, except when it is cold and overcast; then they often stay longer in their nests. Mountain gorillas spend about half of the day eating. Social contacts occur mainly during rest periods. Gorillas are social animals that usually form harems: One silver back male lives together with several adult females and their offspring. However, in mountain gorillas about 40% of groups contain several adult males who are closely related. As groups contain more females than males, many males are ‘left over’.

You will also get some time and meet the Batwa which is the original forest owner tribe, who have also given up their traditional home in the national parks as a big result of the international pressure of protecting the mountain gorilla’s habitant. The Batwa culture is also known to be unique and these have lived for hunting and seeing their homes in the trees, which gives a fantastic glimpse of an ancient way of life. The Batwa people have also got many community projects in Mgahinga as well as Virunga.

These chimpanzee tours go hand in hand with the mountain gorillas and it’s a great opportunity to have them on the same safari in Uganda. You will enjoy these primates as well as wildlife species found in many other national parks.