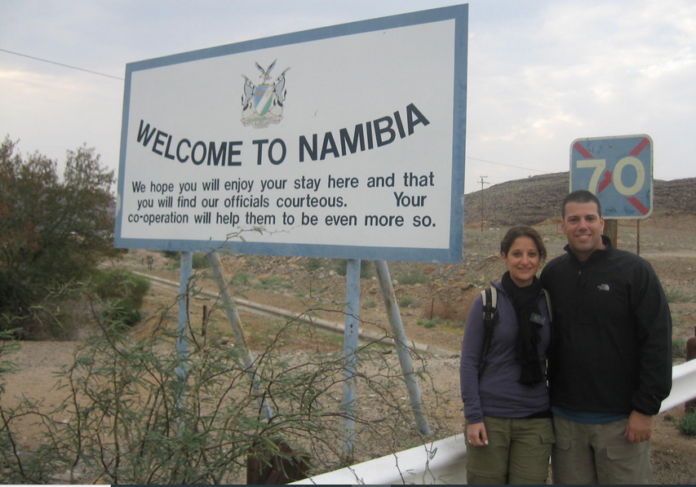 Like many overland border crossings in Southern Africa, crossing the border from South Africa to Namibia was no problem at all. Minimal hassle, and no paperwork or corruption.

Which border crossing to choose?

There are 9 overland border crossings between South Africa and Namibia.However, practically speaking there are only 6. The Oranjemund / Alexander Bay crossing requires a permit to enter the Sperrgebiet (forbidden diamond mining zone), and two other crossing points – Holweg and Lendepas – were closed at the time of writing.

Which one to choose will depend on where you’re going and what time you’d like to cross. We chose the Noordoewer border crossing. And for one of Africa’s most picturesque countries, had to be the dullest border post we’ve ever seen (whomp whomp). Large parts of it were under construction, however, so here’s hoping it looks better next year. 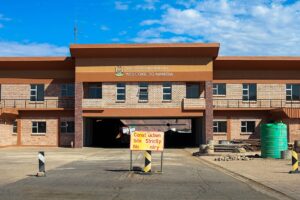 If we had it all to do over again, and had more time on our South African visas, we would have crossed over the Sendelingsdrift border crossing, which involves crossing the Orange river on a pontoon ferry (pictured below). It’s also located in the stunning Richtersveld / Ais-Ais National Parks. Definitely the way to enter Namibia in style! Oh well, maybe next time… 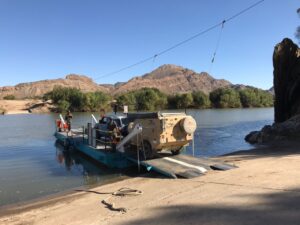 Besides the usual things – including a valid passport – not much documentation is required. Most European and North American passport holders don’t need a visa to enter.

When we crossed, we were filled out a small form asking how many days we would like (max of 90), and our UK passports were stamped for a full 90 days – hooray!

Crossing with a car

We were required to pay a N$160 fee for road tax, and received a cross border permit in exchange. It’s important to hang on to this document – they will ask for it at road blocks and when exiting the country.

The officials were not too interested in whether we owned Maggie (who is registered in Botswana). But it’s always a good idea to have ownership documents to hand. Third party insurance was also not required of us, although it is also a good idea to bring insurance documentation.

If you’re in a rental, make sure you ask the company to write you a letter of permission to bring the vehicle across the border, as there is a possibility that officials will want to see it.

And if you have a non-SACU registered vehicle, a carnet de passage is recommended.

We did get a lot of questions from one curious official as to why we were carrying a carne de passage. Apparently, he thought that it was not possible to get a carne for a Botswana-registered vehicle. Once we clarified the confusion, that indeed it is possible to get a carne through South Africa, he let us continue on our way 🙂