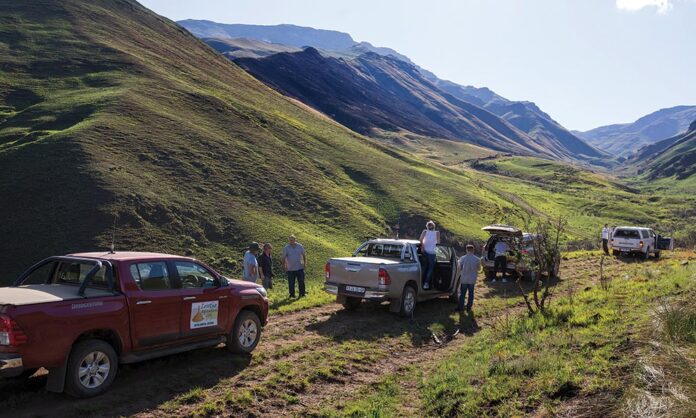 Lesotho is called the ‘Mountain Kingdom’ for a reason – the country is home to some of the highest and most stunning mountain passes in Africa. We recently visited Lesotho and had the pleasure of driving some of these passes, many of which are unavoidable when accessing tourist destinations.

Tips for those attempting to drive these passes: always check the weather and road conditions with the locals. It snows pretty much year-round in Lesotho, and theres’ nothing more terrifying than skidding down a mountain pass at 3,000+ metres!

Here is a short list of our favourite mountain passes… 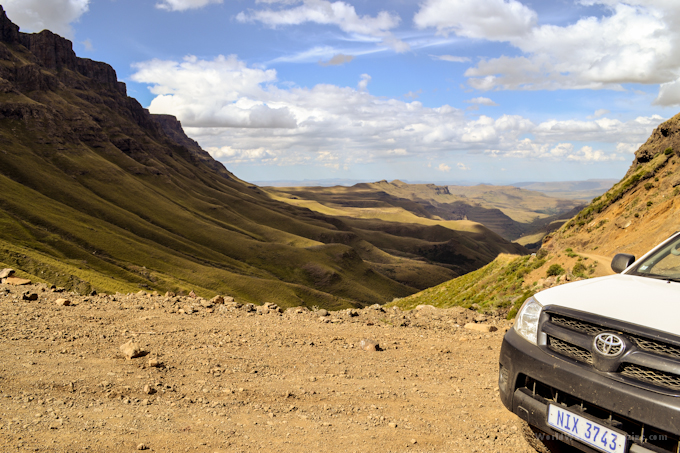 Maggie on the Sani Pass, South Africa to Lesotho

Ok, so the Sani Pass is not technically in Lesotho, but it does connect the country to South Africa. The Sani Pass climbs from 1,544 to 2,876 metres, ascending more than 1,300 metres, to end at Africa’s highest pub, the Sani Mountain Lodge, just over the Lesotho border. Top of the Sani Pass in Lesotho

The pass also continues for several kilometres after the border, reaching a staggering 3,240 metres at its highest point. In the past, this track was gravel and poorly maintained. But this portion of the pass was recently tarred, so no worries.

On the South African side, the track is not paved and is strictly 4×4 only. But don’t let that deter you! We were initially worried about the condition of the road, but we found that it was well-maintained and well-used – dozens of 4×4 tour companies plough up and down the pass each day. With the help of low range gears, Maggie flew up the pass without a problem. 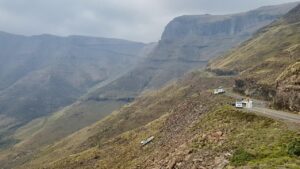 Between the beautiful Katse Dam and Pitseng is the Mafika Lisiu mountain pass, which snakes and bends to 3,090 metres in just 30km. Although the road is tarred, there are long stretches with sheer drops into the canyons below, making it an adrenaline-pumping ride. The views across the Maloti mountain highlands are also unbeatable!

Near the top of this pass is the Bokong Nature Reserve, the country’s highest nature reserve. Unfortunately, it was closed at the time that we visited, although we were assured that it would be opening again in June with revamped chalets and campsite. 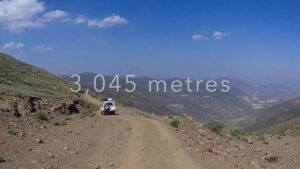 Between Thaba Tseke and Mokhotlong, along a 100km stretch of dirt and gravel road, is the Menoaneng Pass. Because the road is quite degraded and not very well maintained, this pass definitely requires 4×4 skills. And at 3,045 metres, is not for the faint of heart.

But those who can brave it will be rewarded with stunning views across Lesotho’s central mountain highlands. There are also a number of small villages built into the mountains along the way, giving drivers a glimpse of real Lesotho rural life. 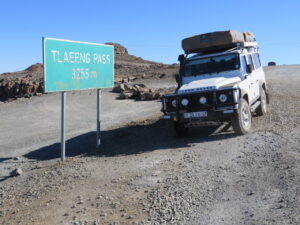 View of the Tlaeeng Pass, Lesotho

Saving the tallest for last, the Tlaeeng Pass is the highest in Africa. Between Mokhotlong and Oxbow, this pass is the home of Lesotho’s only ski resort, and challenger to the Sani Mountain Lodge’s claim to the highest pub in Africa, Afriski. And, luckily for those snow bunnies without 4×4 vehicles, the road is now tarred for the entire journey.

Before reaching Butha-Buthe, there are also two other mountain passes to traverse: the Mahlasela Pass, at 3,222 metres, and the Moteng Pass, at 2,820 metres. All in all, it makes for a long and challenging, but rewarding drive.